For this, I looked at the DJIA data from January 20, 2009 (Obama’s first inauguration) to November 08, 2016 (Trump’s election). I specifically calculated the daily returns and discovered that they are approximately normally distributed using a kernel density method: 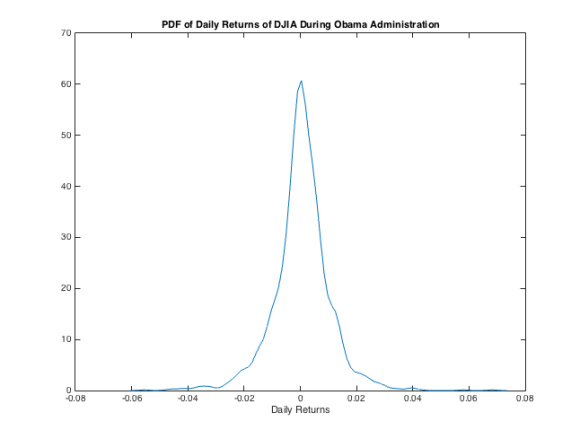 Importantly, one can calculate that the mean daily returns,

, while the volatility in daily returns,

. Indeed, the volatility in daily returns for the DJIA was found to be relatively high during this period. Finally, the DJIA closed at 18332.74023 points on election night, November 08, 2016, which was 53 business days ago.

The daily dynamics of the DJIA can be modelled by the following stochastic differential equation:

denotes a Wiener/Brownian motion process. Simulating this on computer, I ran 2,000,000 Monte Carlo simulations to simulate the DJIA closing price 53 business days from November 08, 2016, that is, January 25, 2017. The results of some of these simulations are shown below: 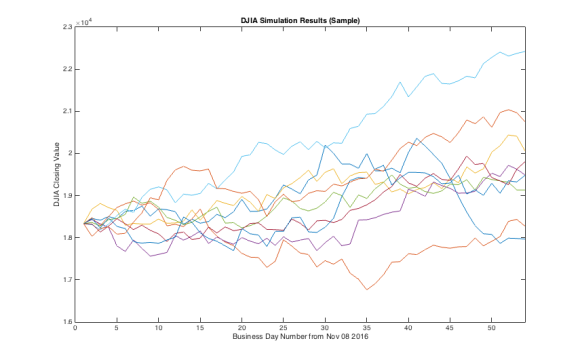 We concluded the following from our simulation. At the end of January 25, 2017, the DJIA was predicted to close at:

That is, the DJIA would be expected to close anywhere between 17398.0923062336 and 20158.94121. This range, albeit wide, is due to the high volatility of the daily returns in the DJIA, but, as you can see, it is perfectly feasible that the DJIA would have surpassed 20,000 points if Trump would not have been elected president.

Further, perhaps what is of more importance is the probability that the DJIA would surpass 20,000 points at any time during this 54-day period. We found the following:

One sees that there is an almost 20% (more precisely, 18.53%) probability that the DJIA would close above 20,000 points on January 25, 2017 had Trump not been elected president. Since, by all accounts, the DJIA exceeding 20,000 points is considered to be an extremely rare/historic event, the fact that the probability is found to be almost 20% is actually quite significant, and shows, that it is quite likely that a Trump administration actually has little to do with the DJIA exceeding 20,000 points.

Although, this simulation was just for 53 working days from Nov 08, 2016, one can see that the probability of the DJIA exceeding 20,000 at closing day is monotonically increasing with every passing day. It is therefore quite feasible to conclude that Trump being president actually has little to do with the DJIA exceeding 20,000 points, rather, one can really attribute it to the day-to-day volatility of the DJIA!