© Ikjyot Singh Kohli and relativitydigest.com, 2019. Unauthorized use and/or duplication of this material without express and written permission from this site’s author and/or owner is strictly prohibited. Excerpts and links may be used, provided that full and clear credit is given to Ikjyot Singh Kohli and relativitydigest.com with appropriate and specific direction to the original content.

Election season is upon us again, and a number of people from political analysts to campaign advisors are making a huge deal about winning the Iowa caucuses. This seems to be the standard “wisdom”. I decided to run some analysis on the data to see if it was true.

I looked at every Democratic primary since 1976 and tried to find which states are absolutely “must-win” for a candidate to be the Democratic presidential nominee. Because the data from a data science perspective is scarce, I had to run Monte Carlo bootstrap sampling on the dataset to come up with the results.

Interestingly, irrespective of the number of bootstrap samples, three classification tree results kept coming up, which I now present:

Very interestingly, from the classification tree above, one sees that actually the most important state for a candidate to win to ensure the highest probability of being the Democratic nominee is Illinois. However, if that candidate loses Illinois, another possible path to the nomination is: Lose Illinois -> Win Hawaii -> Lose Alaska.

The other result from bootstrap sampling was as follows:

Here we see that winning Texas is of paramount importance. In fact, all subsequent paths to the nomination stem from winning Texas.

There is also a third result that came from the bootstrap simulation:

We see that in this simulation, once again Illinois is of prime importance. However, even if a candidate does lose Illinois, evidently a path to the nomination is still possible if that candidate wins Maryland and Arizona.

Conclusion: We see that from analyzing the data that Iowa and New Hampshire are actually not very important in becoming the Democratic party nomination. Rather, Illinois and Texas are much more important to ensure a candidate of a high probability of being the Democratic nominee.

Over the past number of years, the advanced metric known as Offensive Rating has become the standard way of measuring a basketball team’s offensive efficiency. Broadly speaking, it is defined as points scored per 100 possessions. Specifically, for teams, it is defined as (See: https://www.basketball-reference.com/about/ratings.html and https://www.nbastuffer.com/analytics101/possession/ AND https://fansided.com/2015/12/21/nylon-calculus-101-possessions/):

There is a significant issue with this definition as I now demonstrate. Let us compute the partial derivative of this expression with respect to OppORB, we easily obtain:

Here is an embedded dashboard that shows a number of statistical insights for NBA teams, their opponents, and individual players as well. You can compare multiple teams and players. Navigate through  the different pages by clicking through the scrolling arrow below. (The data is based on the most recent season “per-game” numbers.)

(If you cannot see the dashboard embedded below for whatever reason, click here to be taken directly to the dashboard in a separate page.) 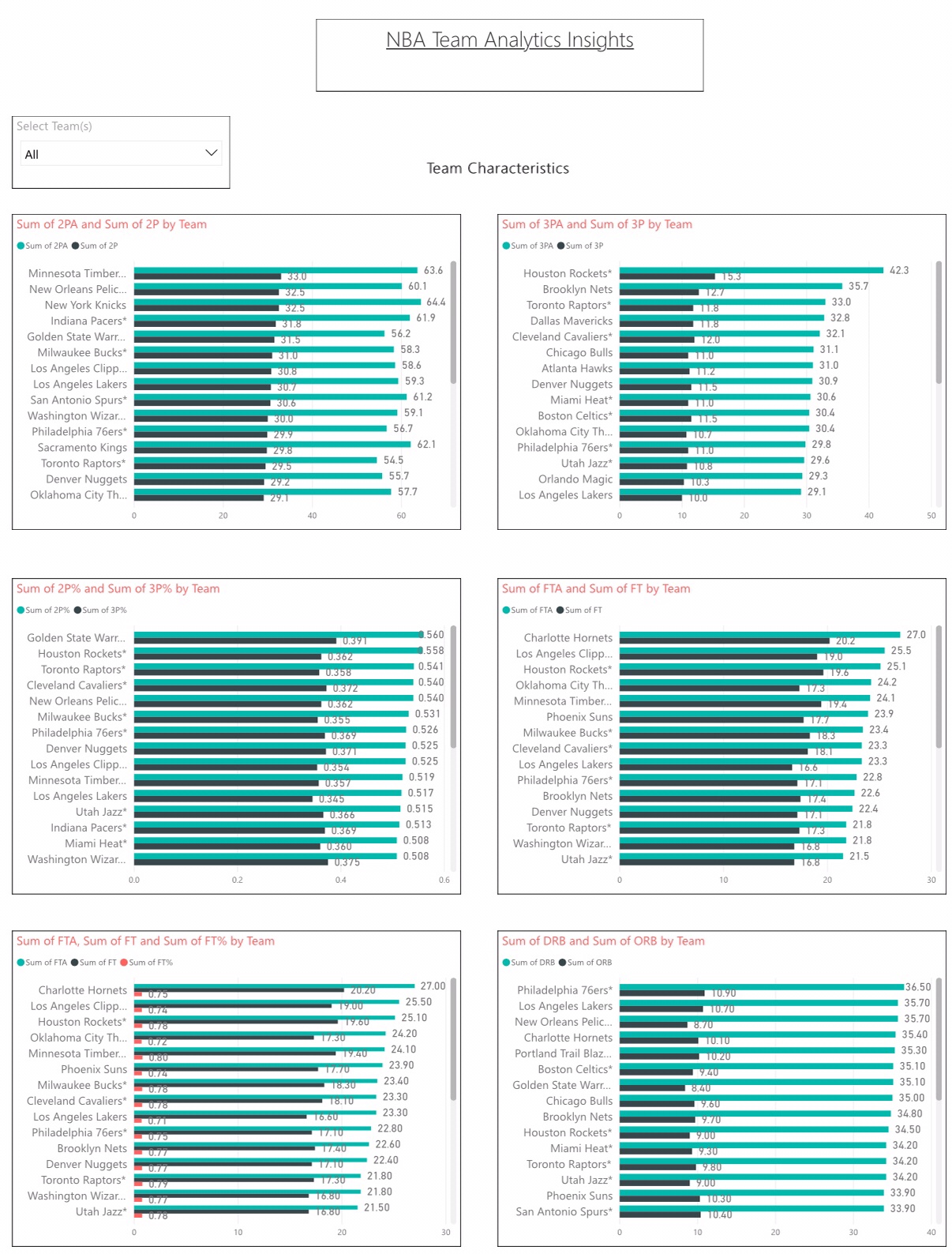 Trump has once again put The U.S. on the world stage this time at the expense of innocent children whose families are seeking asylum. The Trump administration’s justification is that:

“They want to have illegal immigrants pouring into our country, bringing with them crime, tremendous amounts of crime.”

I decided to try to analyze this statement quantitatively. Indeed, one can calculate the probability that an illegal immigrant will commit a crime within The United States as follows. Let us denote crime (or criminal) by C, while denoting illegal immigrant by ii. Then, by Bayes’ theorem, we have:

It is quite easy to find data associated with the various factors in this formula. For example, one finds that

Putting all of this together, we find that:

That is, the probability that an illegal immigrant will commit a crime (of any type) while in The United States is a very low 11.35%.

Therefore, Trump’s claim of “tremendous amounts of crime” being brought to The United States by illegal immigrants is incorrect.

Note that, the numerical factors used above were obtained from:

As more and more teams are increasing the number of threes they attempt based on some misplaced logical fallacy that this somehow leads to an efficient offense, we show below that it is in fact in a team’s opponent’s interest for a team to attempt as many three point shots as possible.

Looking at this season’s data, let us examine two things. The first thing is the number of points a team’s opponent is expected to score for every three-point shot the other team attempts. We discovered that remarkably, the number of points obeys a lognormal distribution:

This means that for every three point shot your team attempts, the opposing team is expected to score

which comes out to about 3.7495 points. So, for every 3PA by a team, the opponent is expected to score more than 3 points based on the most recent NBA data. Keeping that in mind, we see also by integrating

This would suggest a significant breakdown of defensive emphasis in the “modern-day” NBA where evidently teams are just interested in playing shot-for-shot basketball, but in a very risky way that is not optimal.

The work so far covered just three-point attempts, but, what are the effects of missing a three-point shot? The number of opponent points per a three-point miss also remarkably obeys a lognormal distribution:

Therefore, for every three-point shot your team misses, the opposing team is expected to score:

What these calculations demonstrate is that gearing a team’s offense to focus on attempting three-point shots is remarkably risky, especially if a team misses a three-point shot. Given that the average number of three-point attempts is increasing over the last number of years, but the average number of makes has relatively stayed the same (See this older article here: https://relativitydigest.com/2016/05/26/the-three-point-shot-myth-continued/), teams are exposing themselves to greater and greater risk of losing games by adopting this style of play.

Our new article was recently published in The Journal of Geometry and Physics. It is shown that under certain conditions, The Einstein Field Equations have the same form as a fold bifurcation seen in Dynamical Systems theory, showing even a deeper connection between General Relativity and Dynamical Systems theory! (You can click the image below to be taken to the article): 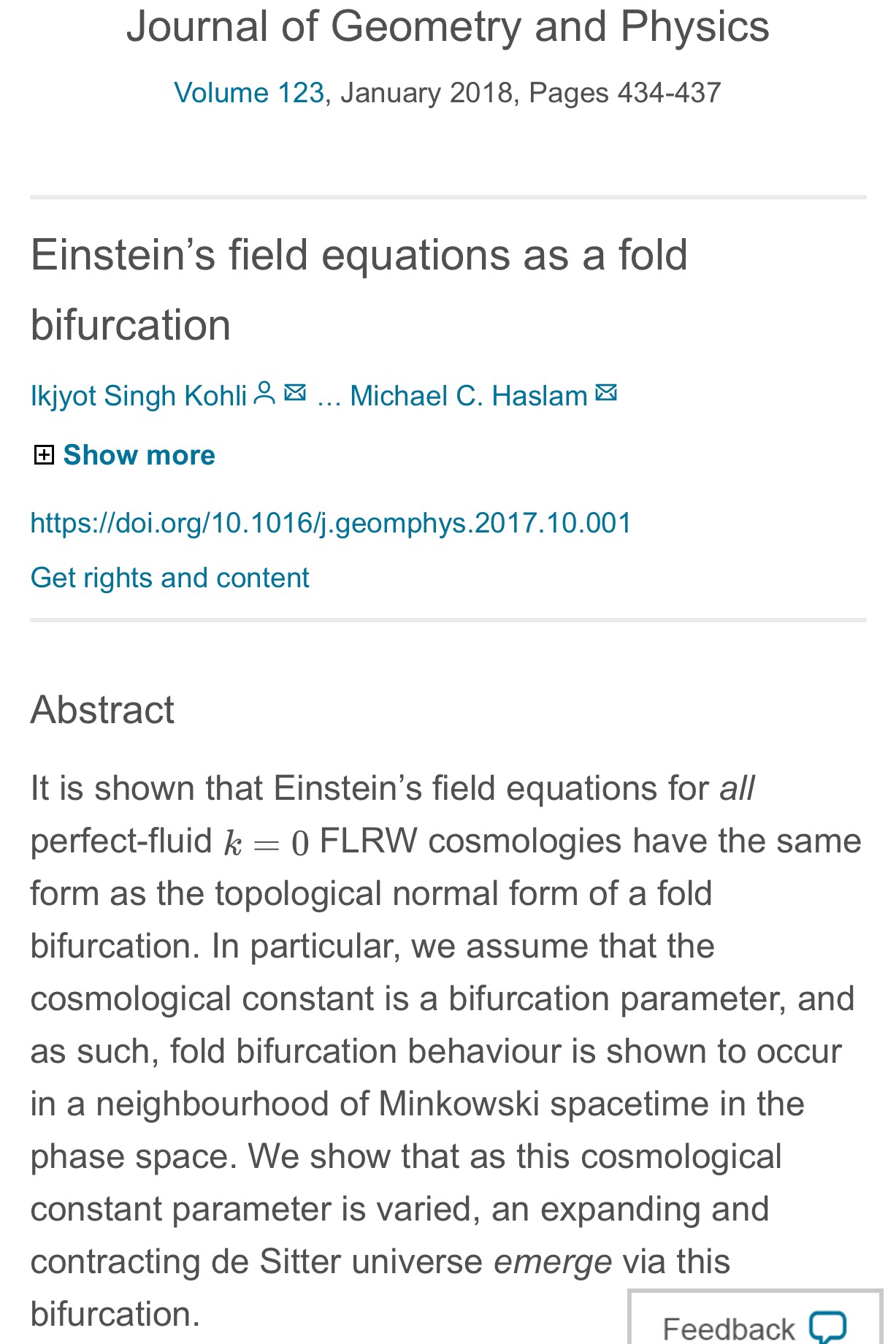 Based on a previous paper I wrote that used machine learning to determine the most relevant factors for teams making the NBA playoffs, I did some further analysis in an attempt to come up with an equation that outputs the probability of an NBA team making the playoffs in a given season.

From the aforementioned paper, one concludes that the two most important factors in determining whether a team makes the playoffs or not is its opponent assists per game and opponent two-point shots made per game. Based on that, I came up with the following equation:

A plot of this equation is as follows: 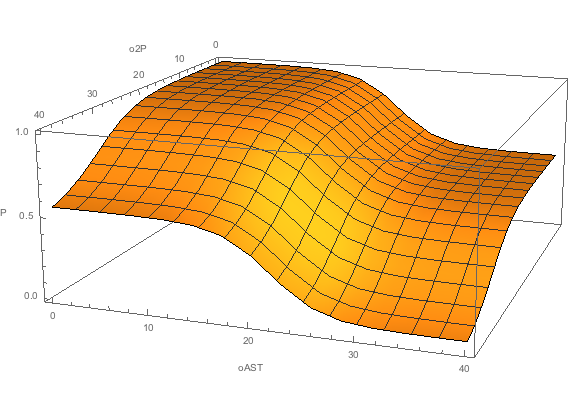 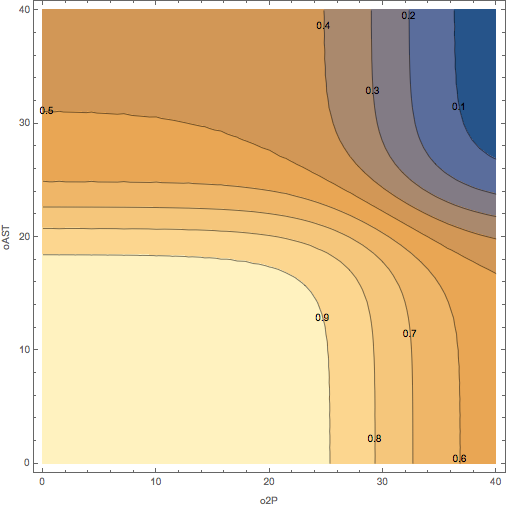 Using this equation, I was able to classify 71% of playoff teams correctly from the last 16 years of NBA data. Even though the playoff classifier developed in the paper mentioned above is more accurate in general, those methods are non-parametric, so, it is difficult to obtain an equation. To get an equation as we have done here, can be extremely useful for modelling purposes and understanding the nature of probabilities in deciding whether a certain team will make the playoffs in a given season. (Also: note that we are using the convention of using 0.50 as the threshold probability, so a probability output of >0.5, is classified as a team making the playoffs.)