As I write this post, the Knicks are currently 12th in the Eastern conference with a record of 22-32. A plethora of people are offering the opinions on what is wrong with the Knicks, and of course, most of it being from ESPN and the New York media, most of it is incorrect/useless, here are some examples:

A while ago, I wrote this paper based on statistical learning that shows the common characteristics for NBA playoff teams. Basically, I obtained the following important result: 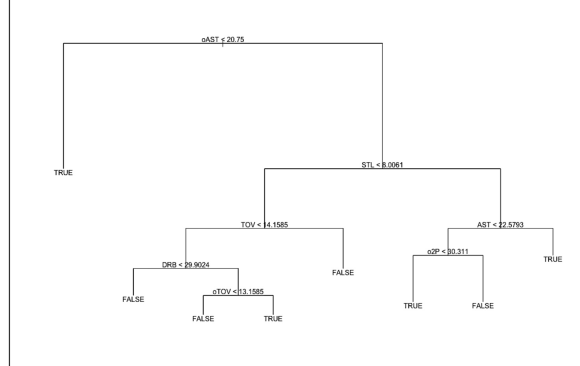 This classification tree shows along with arguments in the paper, that while the most important factor in teams making the playoffs tends to be the opponent number of assists per game, there are paths to the playoffs where teams are not necessarily strong in this area. Specifically, for the Knicks, as of today, we see that:

So, one sees that what is keeping the Knicks out of the playoffs is specifically pressure defense, in that, they are not forcing enough turnovers per game. Ironically, they are very close to the threshold, but, it is not enough.

A probability density approximation of the Knicks’ Opp. TOV/G is as follows:

This PDF has the approximate functional form:

where Erfc is the complementary error function, and is given by:

Therefore, one concludes that while the Knicks problems are defensive-oriented, it is specifically related to pressure defense and forcing turnovers.

By: Dr. Ikjyot Singh Kohli, About the Author

One reply on “So, What’s Wrong with the Knicks?”

This was greaat to read