© Ikjyot Singh Kohli and relativitydigest.com, 2019. Unauthorized use and/or duplication of this material without express and written permission from this site’s author and/or owner is strictly prohibited. Excerpts and links may be used, provided that full and clear credit is given to Ikjyot Singh Kohli and relativitydigest.com with appropriate and specific direction to the original content.

The 2015-2016 NBA season is dawning upon us, and as usual, ESPN has been doing their usual #NBArank, where they are ranking players based on the following non-rigorous methodology:

We asked, “Which player will be better in 2015-16?” To decide, voters had to consider both the quality and quantity of each player’s contributions to his team’s ability to win games. More than 100 voters weighed in on nearly 30,000 pairs of players.

Of course, while I suspect this type of thing has to be just for fun , it has generated a great deal of controversy with many arguments ensuing between fans. For example, Kobe Bryant being ranked 93rd overall in the NBA this year gained a fair deal of criticism from Stephen A. Smith on ESPN First Take.

From a mathematical/data science perspective, the only sensible thing to do is to take all the players in the league, and apply a clustering algorithm such as K-means clustering to group players of similar talents and contributions into groups. This is not a trivial thing to do, but it is the sort of thing that data scientists do all the time! For this analysis, I went to Basketball-Reference.com, and pulled out last season’s (2014-2015) per game averages of every player in the league, looking at 25 statistical factors from FGA, FG% to STL, BLK, and TOV. One can see that this is a 25-dimensional problem.

Our goal then is to consider the problem where denoting

as sets containing the observations in each cluster, we want to solve the optimization problem:

is our distance measure. We use the squared Euclidean distance to define the within-cluster variation, and then solve:

The first thing to do is to decide how many clusters we want to use in our solution. This is done by looking at the within sum of squares (WSS) plot: 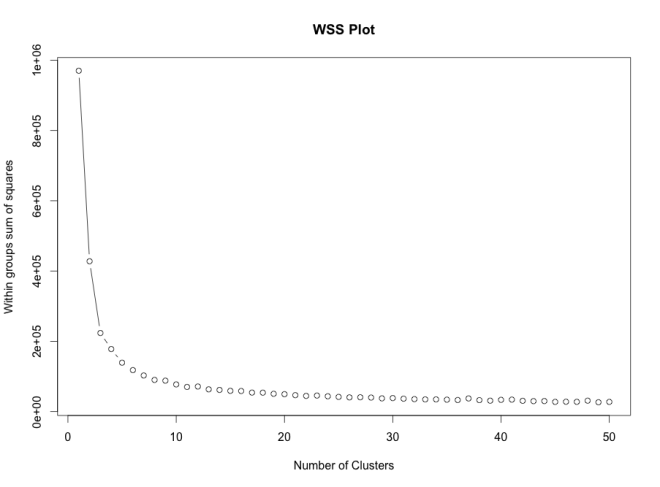 First, we will use 3 clusters in our K-means solution. In this case, the between sum of squares versus total sum of squares ratio was 77.0%, indicating a good “fit”). We use three clusters to begin with, because based on visual inspection, the data clusters very nicely into 3 clusters. The plots obtained were as follows:

Next, we dramatically increase the number of clusters to 20 in our K-means solution.

Performing the K-means clustering, we obtain the following sets of scatter plots. (Note that, it is a bit difficult to display a 25×25 plot on here, so I have split them into a series of plots. Note also, that the between sum of squares versus total sum of squares ratio was 94.8 %, indicating a good “fit”): 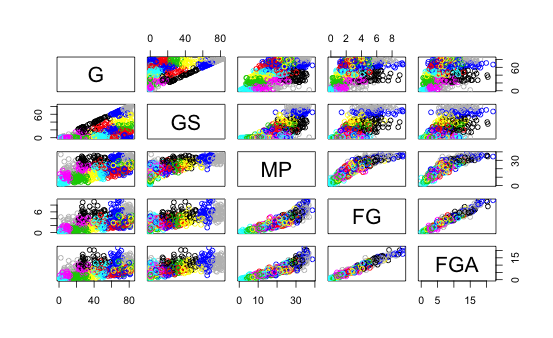 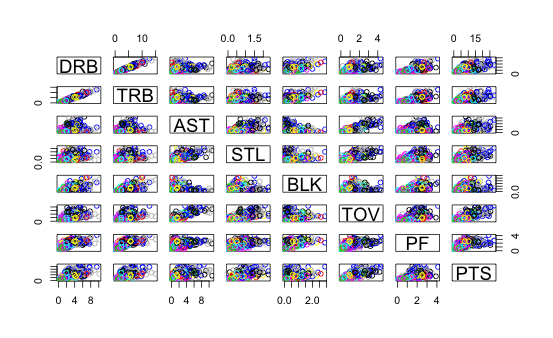 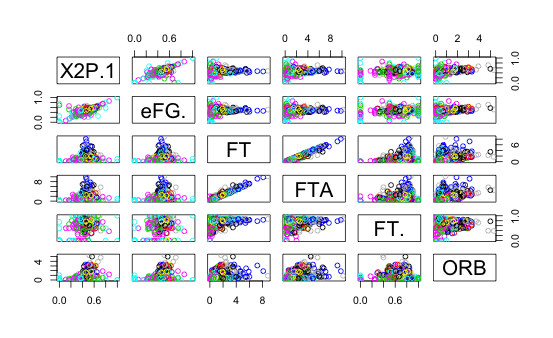 The cluster behaviour can be seen more clearly in three dimensions. We now display some examples: 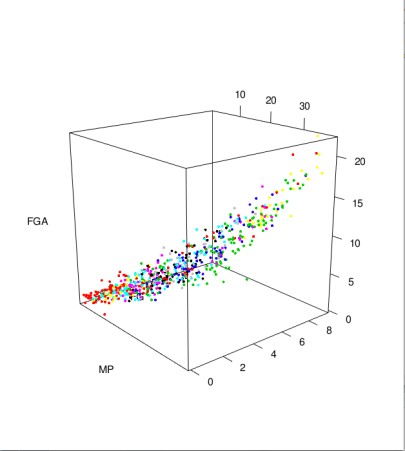 The 20 groups of players we obtained can be seen in the PDF file linked below:

The legend for the clusters obtained was:

Two sample group clusters from our analysis are displayed below in the table. It is interesting that the analysis/algorithm provided that Carmelo Anthony and Kobe Bryant  belong in one group/cluster while LaMarcus Aldridge, Lebron James, and Dwyane Wade belong in another cluster.

If we use more clusters, players will obviously be placed into smaller groups. The following clustering results can be seen in the linked PDF files.

I did not include the visualizations for these computations because they are quite difficult to visualize.

Looking at the 100 Clusters file, we see two interesting results:

We therefore see that is does not make much mathematical/statistical sense to compare and two pairs of players. In my opinion, the only logical thing to do when ranking players is to decide on rankings within clusters. So, based on the above analysis, it makes sense to ask for example whether Carmelo is a better player than Kobe or whether Lebron is a better player than Westbrook, etc… But, based on last season’s statistics, it doesn’t make much sense to ask whether Kobe is a better player than Westbrook, because they have been clustered differently. I think ESPN could benefit tremendously by using a rigorous approach to these sorts of things which spark many conversations because many people take them seriously.

Much has been said about the effect that Kobe has had on the Lakers this season. Byron Scott has been limiting his minutes at times, and at times has played him almost the entire game. There have been times this season where analysts and fans of the Lakers have claimed that the team actually plays better without Kobe. We decided to look at these ideas from a statistical perspective.

We looked at a whole bunch of data of Kobe’s play this season (courtesy of Basketball-Reference.com), and compared his individual play to whether the Lakers win games or not. This is what we found.

From a statistical perspective, the Lakers can win many more games if Byron Scott optimizes the Lakers offense to get Kobe the ball in high-percentage shooting areas of the floor, i.e., closer to the basket than further away from it. Certainly, from a statistical perspective, Byron Scott’s way of allowing Kobe to play “freestyle” basketball is hurting the Lakers’ chances at winning games.

Our previous analysis showed that the Lakers have the best chance of winning consistently when Kobe shoots a high percentage. This analysis shows that it is optimal for him to play between 31-35 minutes a game if he has less than 7 assists, but anytime he has more than 7 assists in a game, the Lakers can be expected to win. Therefore, from an offensive strategy perspective, the Lakers need to play more team-oriented basketball centered around Kobe. In hindsight, which is supported statistically, Kobe and the Lakers would be much better off in a post-oriented offense that promotes distributing the ball, high-percentage shots, and a slow pace. All of these three seem to be completely opposite to how Byron Scott has managed this team this year, and we feel that is why the Lakers have the record that they do! 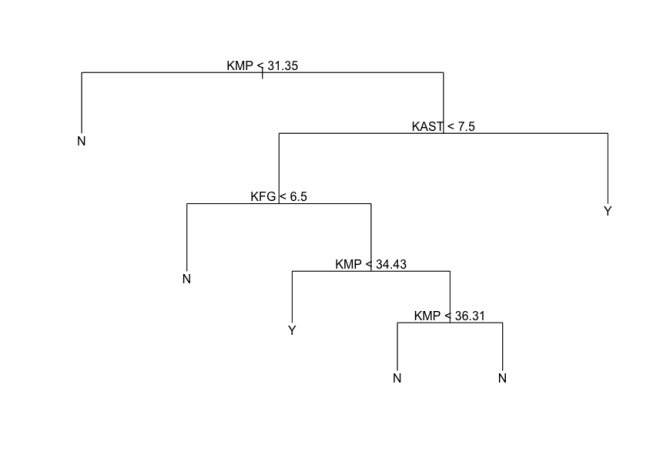