In a previous article, I showed how one could use data in combination with advanced probability techniques to determine the optimal shot / court positions for LeBron James. I decided to use this algorithm on the Knicks’ starting 5, and obtained the following joint probability density contour plots: 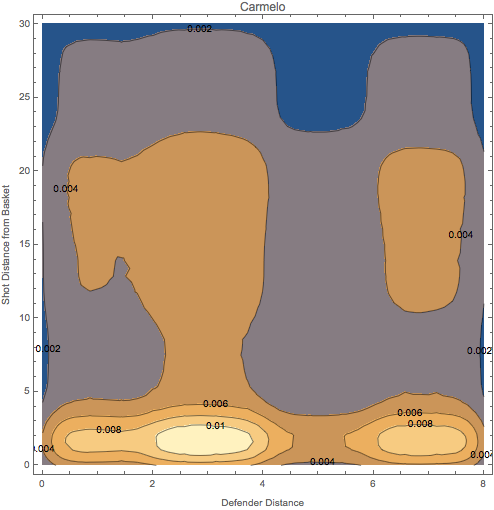 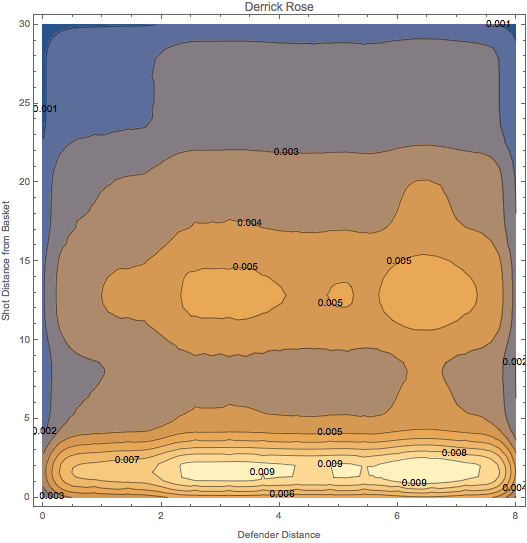 One sees that the Knicks offensive strategy is optimal if and only if players gets shots as close to the basket as possible. If this is the case, the players have a high probability of making shots even if defenders are playing them tightly. This means that the Knicks would be served best by driving in the paint, posting up, and Porzingis NOT attempting a multitude of three point shots.

By the way, a lot of people are convinced nowadays that someone like Porzingis attempting 3’s is a sign of a good offense, as it is an optimal way to space the floor. I am not convinced of this. Spacing the floor geometrically translates to a multi-objective nonlinear optimization problem. In particular, let

represent the (x-y)-coordinates of a player on the floor. Spreading the floor means one must maximize (simultaneously) each element of the following distance metric:

This solution is slightly simpler if one realizes that the metric above is symmetric, so that there are only 11 independent components.

One reply on “The Most Optimal Strategy for the Knicks”