The vast majority of NBA analysts claim today that the NBA has changed. It has become more fast-paced, and there is a significantly greater emphasis on teams attempting more three point shots. The evidence for this is the repeated recital of the fact that over the last number of years, the average three-point attempt rate has increased. An example of such an article can be found here.

It is my hypothesis that this is all based on a very shallow analysis of what is actually going on. In particular, there are more than 60 variables on Basketball-Reference.com that classify each team’s play. It seems strange that analysts have picked out one statistic, noticed a trend, and have made conclusions ushering in the “modern-day” NBA. As I will demonstrate below, using concepts from statistical and machine learning, many things have been missed in their analyses. What is even more strange is that there have been an increasing number of articles claiming that, for example, if teams do not shoot more three point shots, they will probably not make the playoffs or win a championship. Examples of such articles can be found here, here, and here.

I will now demonstrate why all of these analyses are incomplete, and why their conclusions are wholly incorrect.

What classifies a playoff team?

Building a classification tree, I wanted to analyze what factors specifically lead to a team making the playoffs in a given season. I found the following:

At the top of the tree, we see that the distinguishing factor is the average MOV/”Margin of Victory” measured per game. Teams that on average beat their opponents by more than 2.695 points are predicted to make the playoffs, while teams that on average lose by more than 1.825 points are predicted to not make the playoffs. Further, the only factor relating to three-point shooting  in this entire classification tree is the o3PA, which is the number of opponent 3-point attempts per game. For example, suppose a team can has an average MOV of less than -0.54 but greater than -1.825. If that team’s opponent attempts more than 16.0732 3-point shots per game, the team is expected to make the playoffs. In this particular case, getting your opponent to take a lot of three point shots is indeed desirable, and leads to the expectation of a team making the playoffs.

What classifies a championship team?

The next question to analyze is what characteristics/features classify a championship team. Looking at the last 20 years of playoff data, we see that the following classification tree describes the championship criteria for a given NBA playoff team. 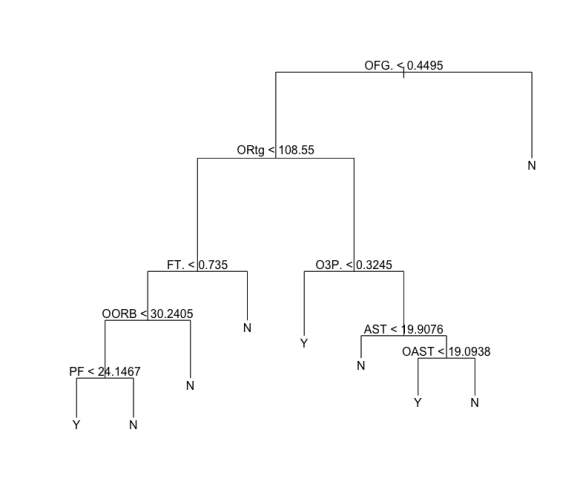 (The learning error rate was 1.172% indicating an excellent fit to the data). One sees that at the very top is a team opponent’s field goal percentage (OFG.). If the average per game OFG% is greater than 44.95%, that team is predicted to not win a championship. Further, there are apparently three predicted paths to a championship:

This shows once again that the three point shot is not at all relevant in winning a championship amongst playoff teams, in that, shooting a lot of threes, or playing as a “modern” team, does not uniquely determine a team’s success. What is tremendously important is defense, and offensive efficiency, and there are multiple ways to achieve this. One does not need to be a prolific three-point shooting team to achieve these metrics.

The increasing  trend of teams shooting more threes and playing at a higher pace still does not uniquely determine whether a team will make the playoffs or win a championship, which is why I have called it a “delusion”. Indeed, the common statement that “nowadays, teams that make the playoffs also have the highest number of three-point shot attempts” is a very shallow statement, and is not actually why teams make the playoffs as this analysis very clearly shows. Further, attempting more three-point shots is not at all uniquely indicative of a team’s success in winning a championship.